As I mentioned in a previous blog, I see kids on a regular basis who have binocular vision or eye tracking efficiency deficits. Usually, the process of explaining this is fairly straightforward. We sometimes show parents examples of activities that their children are struggling with, we go through certain test results with them and compare them against normal values, etc. But when my six-year-old son, Nolan, asked me the other night why he had to do his vision therapy homework I felt somewhat ill-prepared….

"I had to make it important to him, getting him to buy in to doing months of practice at home with me." 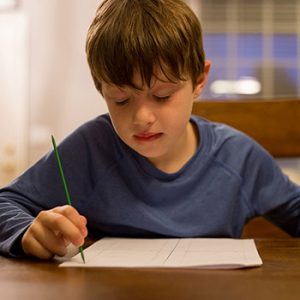 At that moment, I realized that I’d never really had to fully explain this to someone as young as he was.  Sure, we explain things like this to patients all the time, but usually we talk more directly to some of our older kids and teenaged patients. Nolan proceeded to tell me that he could “see everything clearly” and that his “eyes were fine” …all while he was protesting starting his vision therapy home practice of course.

And he wasn’t wrong.  He CAN see things clearly.  He doesn’t need glasses, and in fact, glasses won’t help with what we’re trying to accomplish anyway.  Unfortunately, he’s too smart for me to give him the tired old generic parent response of “because I said so.”  I knew that I needed to craft my response in a manner that would help him to see the benefit.  I had to make it important to him, getting him to buy in to doing months of practice at home with me.  I thought about some of the things that he’d mentioned in the past… how he didn’t want to play baseball because he thought he wasn’t good at catching, how he loves riding his bike, and how the thing he was most excited about when he started school was learning to read.

I began to tell him how practicing vision therapy would help him to learn to catch and throw the baseball better, how he’d be able to ride his bike more confidently on the path and know where to turn (he sometimes has trouble with staying on the right side too), and how it would help him to become an even better reader.  I explained to him that his eyes not only have to see things clearly, but they have to move like a team, just like all of the other parts of his body. Thankfully, Ariana reinforced this at his vision therapy session by telling him that his eyes have to tell his brain to tell his body where to move.

And so seemingly, for now at least, I had his attention.  Since that conversation, I’ve had good cooperation getting his home practice started, even after a long day of school.  We always tell patients that we don’t want vision therapy to become a burden to them, especially during the school year, and believe me, I know how hard it is to try and grab the attention of a child after a full day of school when his brain is just done paying attention for the day.  As parents (and optometrists) we have to come up with better ways to get our children and patients to see value in what we’re providing, whether that means talking about things they’d like to improve on, inventing incentive systems, etc.  In the age of instant gratification, this can be less than easy. But the lessons learned by continuing to work toward a goal can be invaluable… both for a visual system, and a developing young mind.