Elliot, like many students, thought that his classroom struggles could be overcome by hard work alone. As a senior in high school he received a Vision and Learning Screening as recommended by Dr. Doyle, his Highline optometrist. He was then able to understand just how adversely his visual skills affected his learning. The screening revealed his reading comprehension was just 30 percent.

Reading is one of the most challenging aspects of education for school-aged children. It’s also one of the most important considering some amount of reading is required in nearly all subjects. Add a vision deficiency and reading can become an extremely anxiety-inducing part of the school equation.

For Elliot, reading was a struggle for most of his school life. When he read, Elliot would find himself going back over the same lines of text multiple times.

“I would read the first three words or so and then go back,” he recalls. “I was having to read words over and over in order for them to make sense.”

In 2012, when Elliot was in the 8th grade, his Highline eye doctor prescribed Vision Therapy but, at the time, he and his parents were not convinced his problems learning were related to his vision. Most tasks would take him considerably longer than they should. He was also performing poorly on tests.

“It was frustrating because I would study for tests and my mom would quiz me and I would do great,” he says. “I understood the material but when it came time to take the test, the questions I was reading wouldn’t make sense.”

It wasn’t until the beginning of his senior year, in 2018, that Elliot and his mom decided it was time to do something about his vision to address the problems he was having with reading and comprehension. At that time he had developed headaches when reading.

In Elliot’s case, a Vision and Learning Screening from Highline Center for Vision Performance revealed that his eyes were not converging properly. Because of poor convergence, also referred to as eye teaming or binocular vision, his reading comprehension was adversely impacted. Convergence is just one of the 20 vision skills that can impact overall vision performance.

Upon completion of 14 weeks of vision therapy, Elliot had made major improvements in his reading speed and comprehension and his headaches resolved. 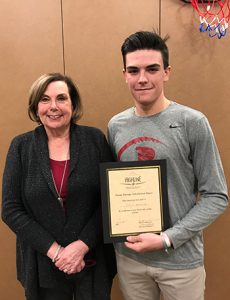 Nancy Stevens worked with Elliot as his vision therapist.

Eliot’s reading comprehension jumped to upwards of 80 percent within his first eight weeks of therapy. In addition to weekly sessions, where he would work with a Highline Center for Vision Performance therapist, Elliot would also have at-home assignments to reinforce the therapeutic benefits and make skills automatic.

Nancy Stevens, Elliot’s vision therapist says, “I was so impressed by how committed Elliot was to his home Vision Therapy practice. At only eight weeks, his visagraph tests revealed his reading speed had jumped from severely reduced to 12th grade level! These dramatic changes can only come when the patient, parent and vision therapist work as a team.”

Ultimately, Elliot says Vision Therapy has had a major positive impact on his level of confidence, thanks to a higher level of classroom success and improved grades in all of his courses. Whereas homework and test taking were once a source of anxiety, he says he’s now back to enjoying learning and setting his sights on college.

“Before I felt stressed out about how fast I finished the test, but now it doesn’t take me more than one try to read the questions,” he says. “I feel more calm during tests because I can read a question and understand and comprehend it.”

What’s more is that Elliot says Vision Therapy also helped him excel at the sports he loves. He’s been involved in both football and basketball since he was in grade school.

“Overall, I feel more confident in basketball and football — my eye/hand coordination has definitely improved,” he says. “This is real, and it helped change my life.”

“We are so proud of Elliot and his success,” Nancy says. “He has already reaped the rewards of his hard work by recently being accepted to CSU. He even wrote a college essay about how Vision Therapy had helped him. His story brings me so much joy and I know his future is brighter now that he can learn more easily!”

If your child is struggling in academics or sports contact Highline Center for Vision Performance today for a complimentary Vision and Learning Screening.