We’ve been busy practicing vision therapy at home amongst other things and I’m very excited to share with you that Nolan is making great progress in vision therapy.  Not only are we starting to see changes in how he is progressing through the various exercises, but we are seeing a positive impact in his everyday life.

I mentioned previously that one of the reasons we started vision therapy was because we felt that Nolan was somewhat clumsy, often knocking into things. Nolan’s job after dinner is usually to clear the plates from the table… something that used to make me cringe as I waited for him to drop or knock something over. Well, just the other night, he successfully lifted his plate up and over his sister’s ill-placed glass, and then proudly stated, “Good thing I’m doing vision therapy Daddy, or I would’ve probably knocked that over.”  Yes!  I was so excited not only to see this change but to know that he was seeing it as well.

In addition, Nolan surprised me at a recent vision therapy session.  There’s a game that we have called Squap.  It’s basically a catch and throw type game that uses paddles and a ping pong ball.  It’s actually fairly challenging. I was surprised not only that Nolan chose to try it with Ariana, but that he actually was able to catch the ball consistently. Catching is one of the things that Nolan really wanted to improve on, and it’s exciting to see him making progress at things that are important to him.

Progress is important to see. And it’s especially important to us as both parents and optometrists that we help our children not only excel at activities in vision therapy, but that we help them to translate those things into everyday life. Seeing these improvements helps us and our patients gain the motivation to continue working hard to get the best results possible! 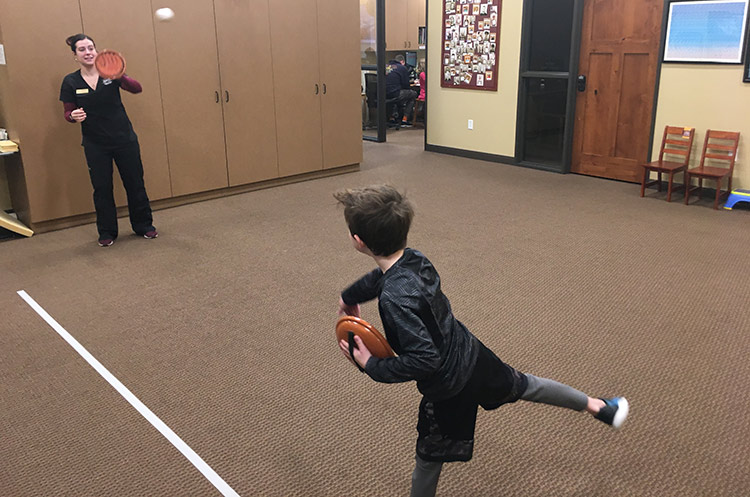